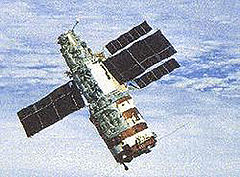 Salyut 7, (a.k.a. DOS-6) was a space station in low Earth orbit from April 1982 to February 1991. It was first manned in May 1982 with two crew via Soyuz T-5, and last visited in June 1986, by Soyuz T-15. Various crew and modules were used over its lifetime, including 12 manned and 15 unmanned launches in total. Supporting spacecraft included the Soyuz T, Progress, and TKS spacecraft.