The launch proceeded normally until telemetry was lost at T+382 seconds, about two minutes into the Blok I stage burn. At this time, the Progress apparently separated from the third stage, almost six minutes earlier than nominal. A high altitude explosion was reported over the skies of Tuva, and debris from the third stage and Progress impacted in a mountainous area approximately 2200 miles (3500 km) downrange from Baikonur.

The unpiloted Russian ISS Progress 65 cargo ship launched to the International Space Station Dec. 1 from the Baikonur Cosmodrome in Kazakhstan on a two-day j...

The Progress resupply vehicle is an automated, unpiloted version of the Soyuz spacecraft that is used to bring supplies and fuel to the International Space Station. 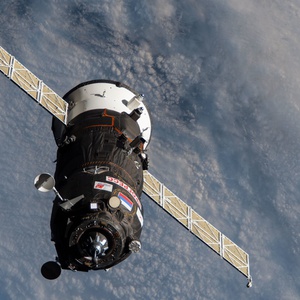 Progress MS-04 (Russian: Прогресс МC-04), identified by NASA as Progress 65 or 65P, was a Progress cargo spacecraft launched by Roscosmos in an unsuccessful attempt to resupply the International Space Station.