ATV-2 is the Automated Transfer Vehicle operated by the European Space Agency (ESA) to resupply the international space station (ISS) with propellant, water, air and dry cargo. After 8 days in orbit it docked to the ISS on 24th February 2011. 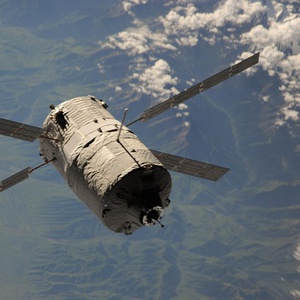 The Johannes Kepler ATV, or Automated Transfer Vehicle 002 (ATV-002), was an unmanned cargo spacecraft built to resupply the International Space Station (ISS). It was launched on 16 February 2011 by the European Space Agency (ESA). Johannes Kepler carried propellant, air and dry cargo weighing over 7,000 kilograms, and had a total mass of over 20,000 kilograms, making it, at the time, the heaviest payload launched by the ESA. The spacecraft was named after the 17th-century German astronomer Johannes Kepler.