This was supposed to be the fourth Cygnus cargo delivery flight to the International Space Station, but resulted in the Antares rocket exploding seconds after liftoff. 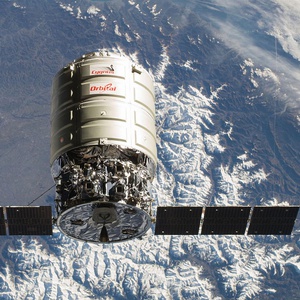 Cygnus CRS Orb-3, also known as Orbital Sciences CRS Flight 3 or Orbital 3, was an attempted flight of Cygnus, an automated cargo spacecraft developed by United States-based company Orbital Sciences, on 28 October 2014. This flight, which would have been its fourth to the International Space Station and the fifth of an Antares launch vehicle, resulted in the Antares rocket exploding seconds after liftoff.