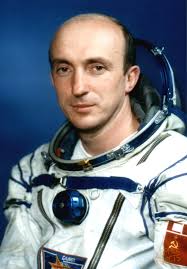 Vladimir Vladimirovich Vasyutin (Russian:Влaдимиp Bлaдимиpoвич Васютин, born March 8, 1952, Kharkiv, Kharkiv Oblast, Ukrainian SSR, died July 19, 2002) was a Soviet cosmonaut. He was selected as a cosmonaut on December 1, 1978 (TsPK-6). He retired on February 25, 1986. Vasyutin was assigned to the TKS program for a new generation of manned military spacecraft that would be docked to the existing Salyut space stations. He flew as the Commander on Soyuz T-14 to the Salyut 7 space station, for part of the long-duration mission Salyut 7 EO-4. He spent 64 days 21 hours 52 minutes in space. The TKS module was already docked to the Salyut and Vasyutin was due to lead an extended programme of military space experiments. However Vasyutin fell ill soon after arriving at the station and was unable to perform his duties. Although he was originally scheduled to have a six-month stay aboard Salyut 7, his illness forced the crew to make an emergency return to Earth after only two months. His illness is said to have been caused by a prostate infection, which had manifested itself as inflammation and a fever.

Soyuz T-14 was the ninth mission to visit the Salyut 7 space station. The mission began on September 17, 1985, 12:38:52 UTC, launching Commander Vladimir Vasyutin, Flight Engineer Georgi Grechko and Research Cosmonaut Alexander Volkov into orbit. They docked with the station next day. During their stay on the station, cosmonauts assisted resident Soyuz T-13 crew with numerous repairs on the station. They also conducted some scientific experiments. Georgi Grechko returned to Earth early with the Soyuz T-13 crew member. The mission concluded with a safe landing back on Earth on November 21, 1985, 10:31:00 UTC.