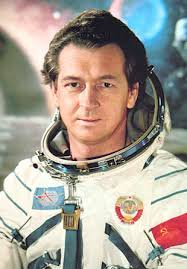 Vitaly Ivanovich Sevastyanov (Russian: Вита́лий Ива́нович Севастья́нов; 8 July 1935 – 5 April 2010) was a Soviet cosmonaut and an engineer who flew on the Soyuz 9 and Soyuz 18 missions.

Soyuz 9 carried cosmonauts Andrian Nikolayev & Vitali Sevastyanov to orbit. The mission lasted 17 days, 16 hours & 58 minutes completing 288 orbits around Earth. They broke the endurance record held by Gemini 7 for 5 years. This was the first crewed space launch that lifted off at night. As of 2016 it still holds the record for longest crewed flight by a solo spacecraft. The goal of the mission was to conduct various pysiological and biomedical experiments on themselves and invastigate possible social implications of extended duration spaceflight.

Soyuz 18 was the second and final crew to man the Salyut 4 space station. The mission began on May 24th 1975 at 1458:10 UTC, launching Commander Pyotr Klimuk & Flight Engineer Vitali Sevastyanov into orbit docking with Salyut 4 2 days later. They stayed on the station for 63 days setting a new Soviet space endurance record at the time. Klimuk & Sevastyanov were the back-up crew for the failed Soyuz 18a mission so their mission goals included completing the goals of Soyuz 18a, continuing the work of Soyuz 17 & fixing or replacing equipment. They replaced a gas analyzer, switched a pumping condenser in the water regeneration system with a hand pump & fixed a spectrometer. Mostly the experiments were biological & medical but they also studied stars, planets, earth and its atmosphere with roughly 2000 photographs of Earth and 600 of the sun taken. The mission concluded with a safe landing on June 26th 1975 at 1418:18 UTC.