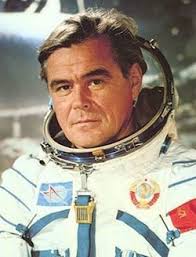 Vasily Grigoryevich Lazarev (Russian: Васи́лий Григо́рьевич Ла́зарев; February 23, 1928 – December 31, 1990) was a Soviet cosmonaut who flew on the Soyuz 12 spaceflight as well as the abortive Soyuz 18a launch in April 5, 1975.

Soyuz 12 launched on 27 September 1973, 12:18:16 UTC. It carried commander Vasili Lazarev and flight engineer Oleg Makarov into orbit. This mission was the first test flight of the modified Soyuz spacecraft, following the tragedy of Soyuz-11. This mission also tested the use of pressurized "rescue space suits" Sokol, worn by crew during launch and re-entry. Crew returned to Earth, landing on 29 September 1973, 11:33:48 UTC.

Soyuz 7K-T No.39, also known as Soyuz 18a or Soyuz 18-1, was intended to be the next crewed mission to the Salyut-4 space station. The mission launched on April 5, 1975, 11:04:54 UTC, but due to a failure of the Soyuz launch vehicle during ascent it was aborted. Safety system initiated separation of the spacecraft, and the crew of commander Vasili Lazarev and flight engineer Oleg Makarov experienced overloads of up to 21.3 g. The capsule landed safely at 11:26:21 UTC, followed by a successful rescue of the crew members.