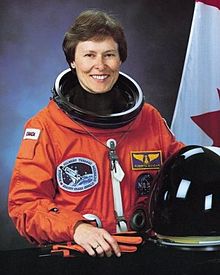 Roberta Bondar (born December 4, 1945) is Canada's first female astronaut and the first neurologist in space. Following more than a decade as NASA's head of space medicine, Bondar became a consultant and speaker in the business, scientific, and medical communities. Bondar has received many honours including the Order of Canada, the Order of Ontario, the NASA Space Medal, over 22 honorary degrees and induction into the Canadian Medical Hall of Fame.

STS-42 was a Space Shuttle Discovery mission with the Spacelab module. The main goal of the mission was to study the effects of microgravity on a variety of organisms.