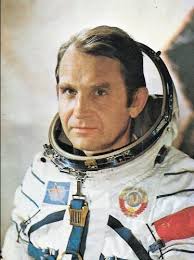 Oleg Grigoryevich Makarov (Russian: Оле́г Григо́рьевич Мака́ров) (6 January 1933 – 28 May 2003) was a Soviet cosmonaut. He was originally part of the Soviet lunar program and was training with Aleksei Leonov for the first manned circumlunar flight. After the success of Apollo 8, however, the flight was cancelled. His first spaceflight was Soyuz 12 in 1973, a test flight to check the changes made to the Soyuz spacecraft after the Soyuz 11 disaster. His second flight was the abortive Soyuz 18a that made an emergency landing in the Altay Mountains, 21 minutes after launch. With his third launch on Soyuz 27 he flew to space station Salyut 6 and landed five days later with the Soyuz 26 spacecraft. His last mission was Soyuz T-3, during which several repairs on Salyut 6 were done. He also served on the backup crews for Soyuz 17 and Soyuz T-2. Altogether he spent 20 days, 17 hours, and 44 minutes in space.

Soyuz 12 launched on 27 September 1973, 12:18:16 UTC. It carried commander Vasili Lazarev and flight engineer Oleg Makarov into orbit. This mission was the first test flight of the modified Soyuz spacecraft, following the tragedy of Soyuz-11. This mission also tested the use of pressurized "rescue space suits" Sokol, worn by crew during launch and re-entry. Crew returned to Earth, landing on 29 September 1973, 11:33:48 UTC.

Soyuz 7K-T No.39, also known as Soyuz 18a or Soyuz 18-1, was intended to be the next crewed mission to the Salyut-4 space station. The mission launched on April 5, 1975, 11:04:54 UTC, but due to a failure of the Soyuz launch vehicle during ascent it was aborted. Safety system initiated separation of the spacecraft, and the crew of commander Vasili Lazarev and flight engineer Oleg Makarov experienced overloads of up to 21.3 g. The capsule landed safely at 11:26:21 UTC, followed by a successful rescue of the crew members.

Soyuz 26 carried Salyut 6 EO-1, which was the first long-duration expedition to the Salyut 6 space station. The mission began on December 10, 1977, 01:18:40 UTC, launching Commander Yuri Romanenko and Flight Engineer Georgi Grechko into orbit. They docked with the station the next day. During their 96-day stay in orbit, crew performed the first Soviet spacewalk since 1969 with the purpose of inspecting one of the stations docking ports. They also performed Earth observation, carried out various experiments and tested new navigation system. EO-1 crew was visited by Soyuz 27 and Soyuz 28 crews; the first ever refueling of the station was performed by an uncrewed cargo ship Progress 1 during the mission. EO-1 crew swapped vehicles with the Soyuz 27 crew, which allowed for a longer stay in orbit. EO-1 crew returned in the Soyuz 27 spacecraft, landing safely back on Earth on March 16, 1978, 11:18:47 UTC.

Soyuz 27 carried Salyut 6 EP-1 mission to the Salyut 6 space station. The mission began on January 10, 1978, 12:26:00 UTC, launching Commander Vladimir Dzhanibekov and Flight Engineer Oleg Makarov into orbit. They docked with the station the next day. During their 5-day stay on the station, crew performed various scientific and technological experiments. EP-1 crew swapped vehicles with the Soyuz 26 (EO-1 expedition) crew, which allowed for a longer stay in orbit for EO-1. EP-1 crew returned in the Soyuz 26 spacecraft, landing safely back on Earth on January 16, 1978, 11:24:58 UTC.

Soyuz T-3 was the 13th mission to visit the Salyut 6 space station. It was the first Soyuz spacecraft since 1971 that carried three cosmonauts. The mission began on November 27, 1980, 14:18:28 UTC, launching Commander Leonid Kizim, Flight Engineer Oleg Makarov and Research Cosmonaut Gennady Strekalov into orbit. They docked with the station the next day. During their 11-day stay on the station, crew was busy with overhauling and maintenance work on the station, and also carried out usual experiments. The mission concluded with a safe landing back on Earth on December 10, 1980, 09:26:10 UTC.