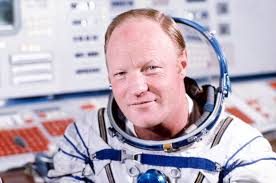 Igor Petrovich Volk (Russian: Игорь Петрович Волк; Ukrainian: Ігор Петрович Волк; 12 April 1937 – 3 January 2017) was a cosmonaut and test pilot in the Soviet Union. Igor Volk was selected as a cosmonaut on 12 July 1977 and flew as Research Cosmonaut on Soyuz T-12, the 7th expedition to Salyut 7. One goal of the mission was to test the effects of long-duration spaceflight on Volk's return flight piloting as a precursor to piloting the Space Shuttle Buran. He served as the head of cosmonaut training for the Buran program and after the project's cancellation, as a Flight Tests Deputy at the Gromov Flight Research Institute in 1995 before retiring in 1996. He previously served as President of the National Aero Club of Russia and Vice President of the Fédération Aéronautique Internationale. As recognition for his contributions as a test pilot and cosmonaut he was awarded the Hero of the Soviet Union on 29 July 1984.

Soyuz T-12 was the seventh mission to visit the Salyut 7 space station and the second to visit the long-duration Soyuz T-10 resident crew of the station. The mission began on July 17, 1984, 17:40:54 UTC, launching Commander Vladimir Dzhanibekov, Flight Engineer Svetlana Savitskaya and Research Igor Volk into orbit. They docked with the station the next day. During their 9-day stay on the station, crew carried out various experiments, and Savitskaya became the first woman to ever perform a spacewalk. The mission concluded with a safe landing back on Earth on July 29, 1984, 12:55:30 UTC.