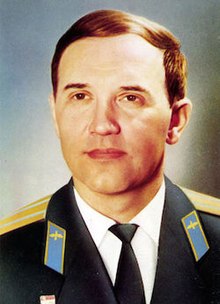 Georgiy Timofeyevich Dobrovolsky (Russian: Гео́ргий Тимофе́евич Доброво́льский; June 1, 1928 – June 30, 1971) was a Soviet cosmonaut who served on the three-man crew of the Soyuz 11 spacecraft. They became the world's first space station crew aboard Salyut 1, but died in space due to asphyxiation due to an accidentally opened valve. They were the first and, as of 2018, the only humans to have died in space. 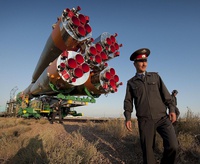 Soyuz 11 launched on 6 June 1971, 07:55:09 UTC. It carried commander Georgy Dobrovolsky, flight engineer Vladislav Volkov and test engineer Viktor Patsayev to orit. Crew arrived to Salyut-1 space station on 7 June 1971 and remained there until their departure on 30 June. It was the only mission to board the space station. Soyuz 11 returned to Earth on 30 June 1971, 02:16:52 UTC, with mission ending in disaster. During atmospheric re-entry crew capsule depressurised, killing all three crew members.