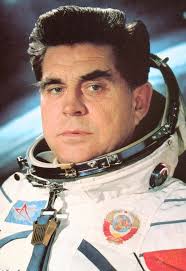 Georgy Timofeyevich Beregovoy (Russian: Гео́ргий Тимофе́евич Берегово́й, Ukrainian: Гео́ргій Тимофі́йович Берегови́й; April 15, 1921 – June 30, 1995) was a Soviet cosmonaut who commanded the space mission Soyuz 3 in 1968. At the time of his flight, Beregovoy was 47 years of age: he was the earliest-born human to go to orbit, being born three months and three days earlier than the second earliest-born man in orbit – John Glenn, but later than X-15 pilot Joe Walker who made 2 (or 3, according to USAF definition) suborbital space flights.

Soyuz 3 was a spaceflight mission, which started with the launch on October 26, 1968, 08:34:18 UTC. Flown by Georgy Beregovoy, the Soyuz 7K-OK spacecraft completed 81 orbits over four days. The mission achieved the first Soviet space rendezvous with the uncrewed Soyuz 2, but Beregovoy failed to achieve a planned docking with the spacecraft. During the remaining time on orbit he performed topographical and meteorological observations. The mission concluded with a safe landing back on Earth on 30 October 1968, 07:25:03 UTC.