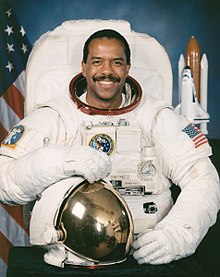 Bernard Anthony Harris Jr. is a former NASA astronaut. On February 9, 1995, Harris became the first African American to perform an extra-vehicular activity (spacewalk), during the second of his two Space Shuttle flights.

STS-55 (Space Transportation System 55), or D-2 was the 55th overall flight of the US Space Shuttle and the 14th flight of Shuttle Columbia. This flight was a multinational Spacelab flight involving 88 experiments from eleven different nations. The experiments ranged from biology sciences to simple earth observations.