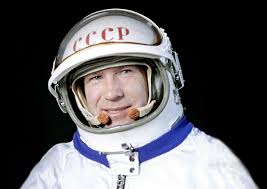 Voskhod 2 carrying Voskhod 3KD spacecraft carried two cosmonauts, Pavel Belyayev & Alexey Leonov, to orbit. The craft was equipped with an inflatable airlock in order to conduct the first ever spacewalk. Alexey Leonov became the first person to do so by performing a 12 minute spacewalk. The mission lasted 1 day, 2 hours, 2 minutes & 17 seconds completing a total of 17 orbits around Earth. The mission had many issues, for example during his spacewalk his spacesuit ballooned up to a point where his suit became stiff. In order to move his limbs again and re-enter the airlock he had to bleed off some of the suit's pressure. After re-entering the capsule,the crew had trouble sealing the hatch, during re-entry the orbital module did not properly disconnect from the landing module causing the spacecraft to spin wildly until turbulence caused them to separate at around 100 km and the automatic landing system failed and the crew had to rely on the manual backup. Earlier troubles meant that spacecraft landed 386 km away from their targeted landing zome in the forests of Upper Kama Upland.

Soyuz 19 was a part of the Apollo-Soyuz Test Project, which was the first joint US-Soviet space flight. The Soviet side of mission began on July 15, 1975, 12:20:00 UTC, launching Commander Alexey Leonov and Flight Engineer Valeri Kubasov into orbit. Two days later, they docked with the Apollo spacecraft. American and Soviet crews visited each other's spacecrafts, performed docking and redocking maneuvers, conducted joint scientific experiments, exchanged flags and gifts. Crews spent more than 44 hours together, and after final parting of the ships Soviet crew spent five more days in orbit. Soyuz 19 returned to Earth with a safe landing on July 21, 1975, 10:50:00 UTC.