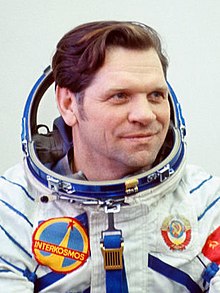 Soyuz 17 was the first of two long-duration missions to the Salyut-4 space station. The mission began on January 10, 1975, 21:43:37 UTC, launching commander Aleksei Gubarev and flight engineer Georgi Grechko into orbit. Spacecraft was manually docked with the station on January 12. During their stay on the station, crew performed an array of astrophysical experiments, including studying the Sun, planets and the stars in a wide electromagnetic spectrum. The mission concluded after 29 days with a safe landing back on Earth on February 9, 1975, 11:03:22 UTC.

Soyuz 28 was the third mission to visit the Salyut 6 space station. This mission, being the first of the Intercosmos program, had the first ever international crew. The mission began on March 2, 1978, 15:28 UTC, launching Commander Aleksei Gubarev and Research Cosmonaut VladimÃ­r Remek into orbit. They docked with the station the next day and greeted the crew of the long0duration EO-1 expedition. During their stay on the station, Soyuz 28 crew performed various scientific and technological experiments. The mission concluded with a safe landing back on Earth on March 10, 1978, 13:44 UTC.