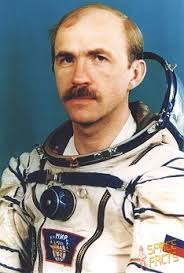 Aleksandr Fyodorovich Poleshchuk (Russian: Александр Фёдорович Полещук, born October 30, 1953) is a Russian cosmonaut. In February 1989 he was selected as a test cosmonaut candidate (1989 Cosmonaut Candidates Class, Group 14, Civil Specialists). From September 1989 to January 1991 he underwent the complete course of general space training and was qualified as a test cosmonaut, and then till March 1992 he undertook advanced training for the Soyuz-TM transport vehicle and Mir station flight. In 1992 he was selected as the backup flight engineer of the Soyuz TM-15 joint Russian-French mission, and consequently nominated as the flight engineer of the prime crew of Soyuz TM-16. In space from January 24 to July 22, 1993, he participated in a 179-day space flight with Gennady Manakov. During the flight he performed two EVAs totaling 9 hours and 58 minutes. Also testing of the androgynous peripheral docking subassembly of the Kristall module was performed. 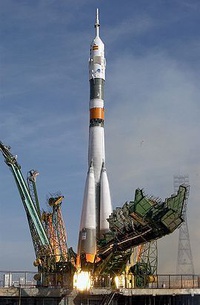 Soyuz TM-16 was the 16th mission and the 13th long-duration expedition to Mir space station. The mission began on January 24, 1993, 05:58:05 UTC, launching Commander Gennadi Manakov and Flight Engineer Alexander Poleshchuk into orbit. They docked with Mir two days later. During their stay there, cosmonauts performed EVAs, various station repair and maintenance tasks, and carried out scientific experiments in materials research, space technology, astrophysics and earth observation. One of the experiments was the deployment of a 20-m foil reflector, which was a test of a future solar reflector designed to illuminate regions on the Earth's surface. Station crew was visited by several Progress resupply spacecrafts, and welcomed aboard the Soyuz TM-17 crew. The mission concluded with a safe landing back on Earth on July 22, 1993, 06:41:50 UTC.