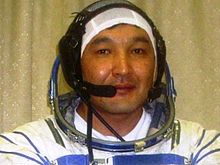 Aimbetov was selected to the first Kazakh cosmonaut class in 2002, along with Mukhtar Aimakhanov, out of a pool of 2,000 candidates. From 2003 to 2009, he trained in Russia as a cosmonaut at Star City. He returned to Astana, in Kazakhstan, after failing to secure a spaceflight. He had been scheduled to fly in autumn 2009, but due to the world financial crisis, this fell through. Aimakhanov remained in Russia, becoming a Russian citizen, making Aimbetov the sole Kazakhstani cosmonaut. In June 2015, he was selected to fly on the Soyuz TMA-18M mission in place of singer Sarah Brightman who had withdrawn in May 2015, and her backup, Satoshi Takamatsu, who had also withdrawn. The mission was projected to launch to the International Space Station on 1 September 2015.[4] Aimbetov becomes the third Kazakh-born cosmonaut to fly since Kazakhstan's independence in 1991, and the first to fly under the Kazakh flag, and as part of KazCosmos.

Soyuz TMA-16M begins expedition 43 by carrying 3 astronauts and cosmonauts to the International Space Station. Russian Commander, cosmonaut Gennady Padalka alongside Flight Engineers, Scott Kelly & Mikhail Korniyenko will launch aboard the Soyuz spacecraft from the Baikonur Cosmodrome in Kazakhstan and then rendezvous with the station. It landed on 12 September 2015 00:51 UTC

Soyuz TMA-18M begins expedition 45 by carrying 3 astronauts/cosmonauts to the International Space Station. Russian Commander, cosmonaut Sergey Volkov alongside Flight Engineers, ESA astronaut Andreas Mogensen and the first Kazakh cosmonaut, Aydyn Aimbetov, will launch aboard the Soyuz spacecraft from the Baikonur Cosmodrome in Kazakhstan and then rendezvous with the station. It landed on 2 March 2016 04:25:27 UTC