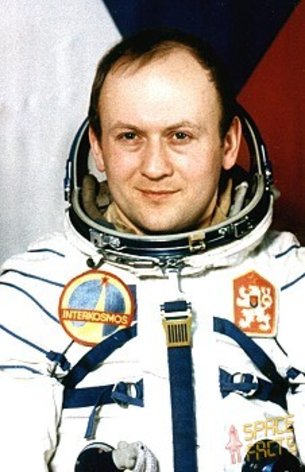 Vladimír Remek (born 26 September 1948) is a Czech politician and diplomat as well as a former cosmonaut and military pilot. He flew aboard Soyuz 28 from 2 to 10 March 1978, becoming the first Czechoslovak in space and the only Czech in space. As the first cosmonaut from a country other than the Soviet Union or the United States, and with the entry of the Czech Republic into the European Union, Remek is considered to be the first astronaut from the European Union.

Soyuz 28 was the third mission to visit the Salyut 6 space station. This mission, being the first of the Intercosmos program, had the first ever international crew. The mission began on March 2, 1978, 15:28 UTC, launching Commander Aleksei Gubarev and Research Cosmonaut VladimÃ­r Remek into orbit. They docked with the station the next day and greeted the crew of the long0duration EO-1 expedition. During their stay on the station, Soyuz 28 crew performed various scientific and technological experiments. The mission concluded with a safe landing back on Earth on March 10, 1978, 13:44 UTC.