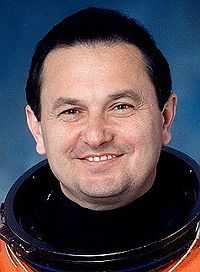 Vladimir Georgiyevich Titov (Russian: Владимир Георгиевич Титов; born 1 January 1947 in Sretensk, Zabaykalsky Krai, Russia) is a retired Russian Air Force Colonel and former cosmonaut. He has participated in four spaceflight missions. The catastrophic explosion of a Soyuz rocket in 1983 led to him being one of only two people to use a launch escape system.

Soyuz T-8 was meant to be the fourth mission to visit the Salyut 7 space station. The mission began on April 20, 1983, 13:10:54 UTC, launching Commander Vladimir Titov, Flight Engineer Gennady Strekalov and Research Cosmonaut Aleksandr Serebrov into orbit. However, the spacecraft failed to dock with the space station and after some further attempts mission had to be aborted. The mission concluded two days later with a safe landing back on Earth on April 22, 1983, 13:28:42 UTC.