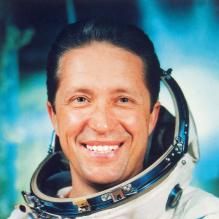 Aksyonov was selected as cosmonaut on 3 March 1973. He was awarded the title of the Hero of the Soviet Union on two occasions. He retired on 17 October 1988. Flew as Flight Engineer on Soyuz 22 and Soyuz T-2.

Soyuz 22 mission began on September 15, 1976, 09:48:30 UTC, launching Commander Yuri Malyshev and Flight Engineer Gennady Strekalov into orbit. The main objective of the mission was Earth observation and imaging, resulting in 2,400 photographs of 30 geographic areas. During their 7-day stay in orbit, crew also conducted several biological experiments. The mission concluded with a safe landing back on Earth on September 23, 1976, 07:40:47 UTC.

Soyuz T-2 was the first crewed flight of the new Soyuz vehicle. It was the tenth mission to visit the Salyut 6 space station and carried the EP-6 crew, which visited the long-duration Soyuz 35 resident crew. The mission began on June 5, 1980, 14:19:30 UTC, launching Commander Yury Malyshev and Flight Engineer Vladimir Aksyonov into orbit. They docked with the station the next day. During their 2-day stay on the station, crew carried out few scientific experiments. After Soyuz T-2 undocked, its crew photographed and visually inspected the space station. The mission concluded with a safe landing back on Earth on June 9, 1980, 12:39:00 UTC.