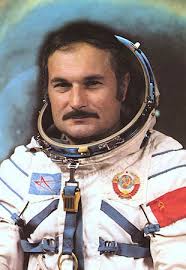 Soyuz 21 was the first crewed mission to the Salyut 5 military space station. The mission began on July 6, 1976, 12:08:45 UTC, launching Commander Boris Volynov and Flight Engineer Vitaly Zholobov into orbit. Spacecraft docked with the station on July 7. During their stay on the station, crew conducted scientific experiments, inculding the first use of Kristall furnace for crystal growth, solar observations and experiments of military nature. The mission was expected to last for 60 days, but emergincies occured on the 42nd day, which included shutdown of several onboard systems, oxygen regeneration system among those. Crew restored functionality of the spaceship, but both Volynov and Zholobov's health was deteriorated, and mission had to end early. The mission concluded after 49 days with a rough landing back on Earth on August 24, 1976, 18:32:17 UTC.