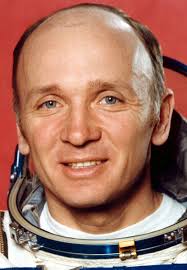 Valentin Vitalyevich Lebedev (Russian: Валентин Витальевич Лебедев; born April 14, 1942 in Moscow) was a Soviet cosmonaut who made two flights into space. His stay aboard the Space Station Salyut 7 with Anatoly Berezovoy in 1982, which lasted 211 days, was recorded in the Guinness Book of Records.

Soyuz 13 launched on 18 December 1973, 11:55:00 UTC. It carried commander Pyotr Klimuk and flight engineer Valentin Lebedev into orbit. This mission was the second test flight of the modified Soyuz spacecraft. Crew spent 7 deays in orbit and carried out various astrophysical studies. They also obtained ultraviolet spectrograms of stars with the help of an Orion 2 Space Observatory onboard the spacecraft. Crew returned to Earth, landing on 26 December 1973, 08:50:35 UTC.

Soyuz T-5 was the first long-duration expedition to the Salyut 7 space station. The mission began on May 13, 1982, 09:58:05 UTC, launching Commander Anatoli Berezovoy and Flight Engineer Valentin Lebedev into orbit. They docked with the station the next day. During their 211-day stay on the station, crew performed various scientific and medical experiments, and were visited by 4 uncrewed cargo Progress vehicles and 2 Soyuz missions. Soyuz T-5 crew, per usual, swapped vehicles with the visiting Soyuz T-7 crew, which allowed for a longer stay in orbit. Cosmonauts returned in the Soyuz T-7 spacecraft, landing safely back on Earth on December 10, 1982, 19:02:36 UTC.

Soyuz T-7 was the third mission to the Salyut 7 space station and the second to visit the long-duration Soyuz T-5 resident crew of the station. The mission began on August 19, 1982, 17:11:52 UTC, launching Commander Leonid Popov, Flight Engineer Aleksandr Serebrov and Research Cosmonaut Svetlana Savitskaya, who was the second woman in space, 20 years after Valentina Tereshkova's flight. They docked with the station the next day. During their 7-day stay on the station, crew performed various scientific and medical experiments. Soyuz T-7, per usual, swapped their vehicles with the resident Soyuz T-5 crew, which allowed for a longer stay on the station. The crew returned in Soyuz T-5 spacecraft, landing safely back on Earth on August 27, 1982, 15:04:16 UTC.