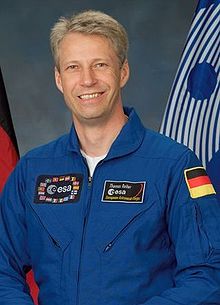 Thomas Arthur Reiter (born 23 May 1958 in Frankfurt, West Germany) is a retired European astronaut and is a Brigadier General in the German Air Force currently working as ESA Interagency Coordinator and Advisor to the Director General at the European Space Agency (ESA). He was one of the top 25 astronauts in terms of total time in space. With his wife and two sons he lives near Oldenburg in Lower Saxony.

Soyuz TM-22 was the 23rd mission and the 20th long-duration expedition to Mir space station. It was also a part of the US/Russian Shuttle-Mir Program. The mission began on September 3, 1995, 09:00:23 UTC, launching Commander Yuri Gidzenko, Flight Engineer Sergei Avdeyev and Research Cosmonaut Thomas Reiter into orbit. They docked with Mir two days later. During their stay there, cosmonauts performed several EVAs and various scientific experiments. Station crew was visited by several Progress resupply spacecrafts, STS-74, and welcomed aboard Soyuz TM-23 with the next expedition crew. The mission concluded with a safe landing back on Earth on February 29, 1996, 10:42:08 UTC.

STS-121 was a 2006 NASA Space Shuttle mission to the International Space Station (ISS) flown by Space Shuttle Discovery. The main purposes of the mission were to test new safety and repair techniques introduced following the Columbia disaster of February 2003 as well as to deliver supplies, equipment and European Space Agency (ESA) astronaut Thomas Reiter from Germany to the ISS.