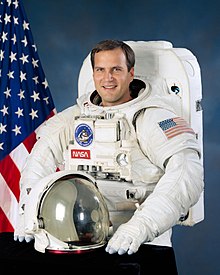 Richard James Hieb is a former NASA astronaut and a veteran of three space shuttle missions. He was a mission specialist on STS-39 and STS-49, and was a payload commander on STS-65.

STS-39 was the twelfth mission of the Space Shuttle Discovery and its primary purpose was to conduct a variety of payload experiments for the Department of Defence.