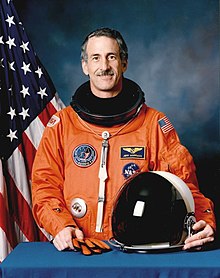 Jeffrey Alan Hoffman is an American former NASA astronaut and currently a professor of aeronautics and astronautics at MIT. Hoffman made five flights as a space shuttle astronaut, including the first mission to repair the Hubble Space Telescope in 1993, when the orbiting telescope's flawed optical system was corrected.

STS-51-D was the sixteenth flight of the shuttle and fourth for the Space Shuttle Discovery. Its mission was to deploy a number of 10 satellites. The landing suffered extensive brake damaged and a ruptured tire. All subsequent landings had to be done at the Edwards Air Force Base until the development and implementation of nose steering.

STS-35 was the tenth flight of Columbia and the 38th of the shuttle program. Its mission was devoted to astronomical observations using ASTRO-1, a spacelab observatory consisting of four telescopes.

STS-75 was a United States NASA Space Shuttle mission, the 19th mission of the Columbia orbiter.