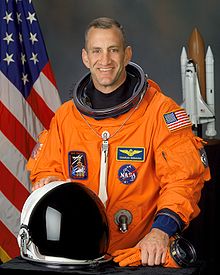 Charles Owen "Scorch" Hobaugh is a former NASA astronaut and a retired U.S. Marine Corps officer. He has had three spaceflights, all of which were Space Shuttle missions to the International Space Station, lasting between 10 and 13 days.

STS-118 was a space shuttle mission to the International Space Station (ISS) flown by the orbiter Endeavour.