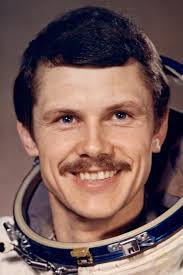 Bertalan Farkas (born August 2, 1949) is the first Hungarian cosmonaut and the first Esperantist in space. He is currently the president of Airlines Service and Trade. With Charles Simonyi's space travel, Farkas is no longer the only Hungarian who has been to space (he is still the only astronaut, as Simonyi flew as a space tourist).

Soyuz 35 was the eighth mission to visit the Salyut 6 space station and carried the EO-4 expedition, which was the fourth long-duration crew for the station. The mission began on April 9, 1980, 13:38:22 UTC, launching Commander Leonid Popov and Research Cosmonaut/Flight Engineer Valery Ryumin into orbit. They docked with the station the next day. During their 186-day stay on the station, EO-4 crew conducted various scientific experiments, some repairs and replacements to the station and were visited by three uncrewed Progress cargo spacecrafts and 4 crewed Soyuz vehicles. Soyuz 35 swapped vehicles with the Soyuz 37 crew, which allowed for a longer stay in orbit. The mission concluded with a safe landing back on Earth on October 11, 1980, 09:49:57 UTC.

Soyuz 36 was the ninth mission to visit the Salyut 6 space station and carried the EP-5 crew, which visited the long-duration Soyuz 35 resident crew. The mission began on May 26, 1980, 18:20:39 UTC, launching Commander Valery Kubasov and Research Cosmonaut Bertalan Farkas, the first Hungarian cosmonaut, into orbit. They docked with the station the next day. During their 7-day stay on the station, EP-5 crew conducted various scientific experiments, including measuring radiation doses received by the crew. Soyuz 36 swapped vehicles with the resident station crew, and returned in Soyuz 35 spacecraft. The mission concluded with a safe landing back on Earth on June 3, 1980, 15:06 UTC.