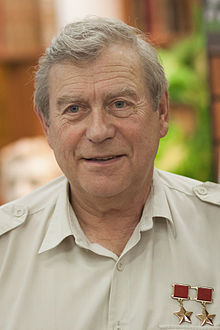 Aleksandr Pavlovich Aleksandrov (Russian: Александр Павлович Александров; born February 20, 1943) is a former Soviet cosmonaut and twice Hero of the Soviet Union (November 23, 1983, and December 29, 1987). He was selected as cosmonaut on December 1, 1978. For his first spaceflight, he flew as Flight Engineer on Soyuz T-9, which lasted from June to November 1983. For his second spaceflight, he replaced one of the long-duration crew members of Mir EO-2. For the spaceflight, he was launched with the spacecraft Soyuz TM-3 in July 1987, and landed with the same spacecraft in December 1987. All together he spent 309 days, 18 hours, 2 minutes in space. He served as backup for Soyuz T-8, Soyuz T-13, and Soyuz T-15.

Soyuz T-5 was the second long-duration expedition to the Salyut 7 space station. The mission began on June 27, 1983, 09:12:00 UTC, launching Commander Vladimir Lyakhov and Flight Engineer Aleksandr Aleksandrov into orbit. They docked with the station the next day. During their 150-day stay on the station, crew carried outd various scientific and medical experiments, performed two EVAs to install additional solar panels on the station, and were visited by 2 uncrewed cargo Progress vehicles. The mission concluded with a safe landing back on Earth on November 23, 1983, 19:58:00 UTC.

Soyuz TM-3 was the third mission to Mir space station. The mission began on July 22, 1987, 01:59:17 UTC, launching Commander Alexander Viktorenko, Flight Engineer Aleksandr Aleksandrov and Research Cosmonaut Muhammed Faris, the first Syrian cosmonaut, into orbit. They docked with Mir two days later. During their stay there, crew conducted Earth observation, medical and other scientific experiments. The mission concluded with a safe landing back on Earth on July 30, 1987, 01:04:12 UTC.