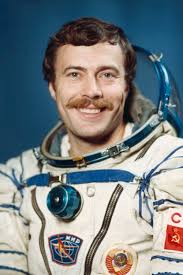 Aleksandr Nikolayevich Balandin (Russian: Александр Николаевич Баландин) (born July 30, 1953) is a Russian cosmonaut. He is married with two children. He was selected as a cosmonaut on December 1, 1978, and retired on October 17, 1994. He flew as a flight engineer on Soyuz TM-9. He worked at NPO Energia until 1994, and was then President of Lendint-Association until 2000

Soyuz TM-9 was the ninth mission and the sixth long-duration expedition to Mir space station. The mission began on February 11, 1990, 06:16:00 UTC, launching Commander Anatoly Solovyev and Flight Engineer Aleksandr Balandin into orbit. They docked with Mir two days later. During their stay there, cosmonauts performed two EVAs, various station maintenance tasks, and carried out scientific experiments in biology, geophysics, space technology, astronomy etc. The mission concluded with a safe landing back on Earth on August 9, 1990, 07:33:57 UTC.