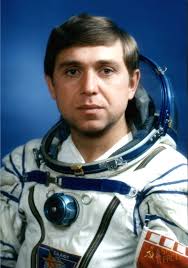 Aleksandr Aleksandrovich Volkov (Russian: Алекса́ндр Алекса́ндрович Во́лков, born 27 May 1948) is a retired Russian cosmonaut. He is a veteran of 3 space flights, including twice to the Mir Soviet space station, and is the father of cosmonaut Sergey Volkov.

Soyuz T-14 was the ninth mission to visit the Salyut 7 space station. The mission began on September 17, 1985, 12:38:52 UTC, launching Commander Vladimir Vasyutin, Flight Engineer Georgi Grechko and Research Cosmonaut Alexander Volkov into orbit. They docked with the station next day. During their stay on the station, cosmonauts assisted resident Soyuz T-13 crew with numerous repairs on the station. They also conducted some scientific experiments. Georgi Grechko returned to Earth early with the Soyuz T-13 crew member. The mission concluded with a safe landing back on Earth on November 21, 1985, 10:31:00 UTC.